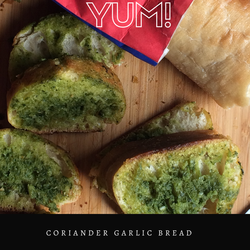 Different flavor than the usual garlic bread, crisp on the outside and soft on the inside!!

One of the most easiest and a great accompaniment to soups, pasta or bakes. I love the idea of coriander as it gives a new flavour and dimension to this bread. The kind of bread traditionally used is the baguette or ciabatta (another type of Italian bread), But believe me I have made this using normal bread as well and it tastes equally good. At the end of the day the tastes that lingers in your mouth and the memories that form in your heart is what matters. I always like to go out of the way than follow any recipe blindly. Experimenting with different flavours and textures is the essence of good food.And at times they might fail and combinations might not work well as you envisaged. But that should not stop one from moving forward as there is always a next time, a new page , a new day and a new beginning..